Just weeks after the introduction of a Senate measure designed to prevent makers of plant-based dairy substitutes from using terms like “milk” or “yogurt” on their packages, a new area of combat has opened, this time in the courts.

In the case against Blue Diamond Growers, Food Navigator-USA reported that the court filing alleges the self-identified “almondmilk” producer had “deceptively informed and led its customers to believe that they were purchasing, for a premium price, a dairy milk alternative that is nutritionally equivalent, and even superior to dairy milk.” Although Almond Breeze Original does contain several vitamins and nutrients, including calcium, it lacks in nutritional value when compared to 2 percent milk, the suit claims.

The court filing goes on to state that Blue Diamond’s “entire marketing strategy portrays its almond beverages as nutritionally superior to dairy milk.”

The class actions come almost immediately after Blue Diamond agreed to pay $9 million last month in a class action settlement arguing that Almond Breeze falsely claimed to be “All Natural.” The settlement did not include an admission of wrongdoing.

While the allegations against WhiteWave and Blue Diamond will need to be proved through the American legal system, the nutritional benefits and deficiencies of milk alternatives have long been a controversial subject within the dairy and beverage industries.

Although the amount of nutrients in alt-milks can vary widely depending on ingredients and brand, pro-dairy advocates have often pointed to a lack of protein and vitamins in many nut and plant-based milks as evidence of dairy’s superiority.

“One of the reasons we have these labeling standards is so that consumers understand what they are purchasing,” said Chris Galen, spokesman for the National Milk Producers Federation. “All real milk has a consistent package of protein, calcium, Vitamins A & D, and five other nutrients. Plant foods don’t have the same uniform offering of nutrients. What people may fail to grasp is that the vegetable alternatives are imitations, but not an acceptable substitute, from a nutritional standpoint.”

Galen said that although his organization is not involved in this recent round of litigation, the National Milk Producers Federation has long been an advocate for stricter protection of milk’s standard of identity.

But many alt-milk producers and supporters disagree that there is any consumer confusion about the nutritional benefits of nut and plant-based milks. Molly Spence, director of North America for the Almond Board of California, told BevNET that recent attempts at litigation against almond milk companies “comes a little late” as the drink has existed for centuries and brands make no false claims about their own nutrition stats.

“The variety of milks on the market today simply comes down to consumers having more choice,” Spence said. “Almond milk has been appealing because it has no saturated fat or cholesterol; it’s fortified with vitamins and minerals; unsweetened products can have 0 grams of sugar and as few as 30 calories a serving; it’s dairy-free/plant-based/vegan; and the nutty taste and creamy texture is appealing.” 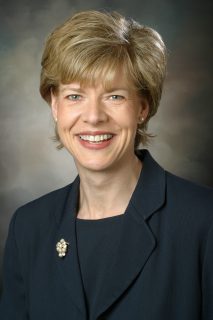 It’s that appeal — and the erosion of sales of dairy milk as well — that may have led U.S. Sen. Tammy Baldwin, D-WI, to submit “The Dairy Pride Act,” a bill that would requirethe U.S. Food and Drug Administration (FDA) to enforce regulations defining the terms “milk,” “yogurt,” and “cheese” as strictly related to animal dairy products, effectively banning nut and plant-based alternatives from using the terms in their names or packaging. The proposed bill came several weeks after a bipartisan group of U.S. congressmen submitted a letter to the FDArequesting they crack down on dairy alternatives.

This increased federal scrutiny left many dairy alternative beverage producers questioning the legitimacy of common dairy industry arguments that nut and soy alternative drinks infringe on dairy milk’s standards of identity. It also leaves legal ambiguity as to whether nu-spellings such as “Mylk” or the single-word “Almondmilk” are in violation of the rules. On February 2, the Plant Based Food Association sent its own letter to the FDA arguing current plant-based milks are already accurate in their labeling, using their “common or usual name.”

But standard of identity is no longer the only issue for dairy alternatives, and the lawsuits are likely to bring nutritional differences further into the public eye.

For their part, the plant-based side is sometimes willing to acknowledge what their products lack.

“We’ve seen that dairy spokespeople have noted almond milk doesn’t have naturally occurring protein, and that’s true,” Spence said. “So if you’re looking for protein, you’re better off with dairy milk or a handful of almonds.”

According to Lindsay Moyer, senior nutritionist at the District of Columbia-based Center for Science in the Public Interest, protein is one of the key differences between dairy and alt-dairy milks. An average cup of 1 percent milk contains about 8g of protein, while almond milks only contain 1g on average. Soy milk can often contain more, as do pea protein-based milks. Often to match the nutrition of dairy milk, alt-milks must be fortified with added calcium and vitamins.

Cow’s milk also naturally contains sugar, while the sugar of almond and soy milk is added, usually along with vanilla and chocolate flavoring, which Moyer said can sometimes be equivalent to a day’s worth of added sugar as recommended by the American Heart Association.

But the big question for consumers is “does it matter?” The difference in nutrients between products may not actually be that important to consumers who prefer almond or soy milk, whether due to lactose intolerance, a vegan diet, or simple preference for taste.

“It depends on if you’re relying for the milk for protein,” Moyer said. “If all you’re having for breakfast is cereal with non-dairy milk then that might matter. But if you’re looking for a low calorie beverage, an unsweetened almond milk might only have about 30 calories per cup, so that’s a plus.” 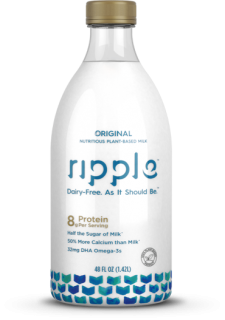 But for some consumers it does matter. Plant-based milk company Ripple chose its name to represent the shake-up it hoped to have throughout the dairy alternative category. Using pea protein, the company produces a non-dairy milk that has directly marketed itself as a highly nutritious drink. On the brand’s website, Ripple boasts 50 percent more calcium than cow’s milk, more vitamin D, half the sugar, a fraction of the saturated fat, and it matches the 8g of protein.

“Milk is a wholesome kind of ‘mom and apple pie’ kind of beverage and we think alternatives to milk should be just as healthy,” Ripple co-founder Adam Lowry told BevNET.

Ripple, which launched in Whole Foods stores last year, has also not shied away from using the standalone term “milk” on its packaging, foregoing the creative spelling and grammatical workarounds other brands have used (see: “mylk”). Although Lowry said he wasn’t too concerned with the legal battle waging over the word, he’s not a fan of the recent attempts to legislate and crack down on non-dairy brands.

“On one hand I can agree with the gripe of the dairy industry that these alternative milks that don’t have nutrition are harvesting unfairly the health halo of milk,” Lowry said. “I can understand the frustration there, but on the other hand they’re trying to define it as a ‘lacteal secretion from a cow.’ And that’s ridiculous. I’d love to have some threshold of using that term ‘milk’ being defined by meeting a nutritional standard, I think that’s fine, but given how many people want a dairy-free alternative it shouldn’t be limited to ‘lacteal secretions.’”

But Ripple’s strategy takes share from both alt-milks and dairy milks alike, and he didn’t hold back on the almond-based substitutes. Although many almond milk producers have varieties containing extra protein, Lowry said he doesn’t believe many almond milk drinkers are aware of the lack of protein. In some regard, the category, he said, let nutrition get away. And as more consumers begin drinking alt-milks, producers may need to live up to a standard.